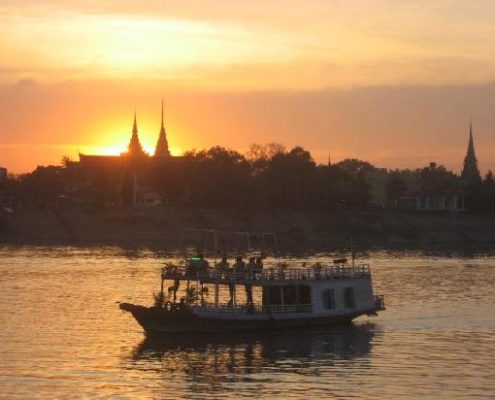 Phnom Penh is known as the hidden pearl of Asia due to its exquisite architecture and intricate history. Explore Cambodia’s capital led by an expert guide. You will encounter all the most beautiful and important sites of Phnom Penh’s rich culture and history from the comfort of your charming tuk-tuk. A tuk-tuk is a bit like a rickshaw, except powered by a motor. Phnom Penh is famous for its ancient architecture dating back to the Khmer period. After refreshment at the hotel, you will join in Sunset Cruise dinner in Phnom penh to welcome you to Cambodia. Cruise with a unique overview of Phnom Penh, from Wat Phnom to Royal Palace and Mekong crossing. During almost 2.5 hours, you will discover Phnom Penh riverside from Tonle Sap river to Mekong river from a unique, quiet and breezy place, where you enjoy unlimited drinks and busy Phnom Penh’s riverside by night

Visit Royal Palace, built by the French in 1866 on the site of the old town, and the Silver Pagoda, located within the Royal Palace, the silver Pagoda is so named because of its floor, which is made up of 5000 silver tiles, the treasures are a solid gold Buddha encrusted and weighing 90 kilos and a small 17th century emerald and baccarat crystal Buddha.

Afternoon visit Champey Academy of Art, founded in 2013, Champey Academy of Arts is a non-profit school offering the youth of Phnom Penh free training in Cambodian traditional arts including dance, music, drawing and painting. Champey’s mission is to inspire young people to preserve, protect and promote their nation’s culture.

Visit Russian Market (Phsar Toul Tom Poung) Toul Tum Poung market is often referred to as the Russian market because of its popularity among Russian expatriates during the 1980s. This market is popular to collectors of genuine antiques; also, for those looking for good reproductions. Filled with stalls selling sundry souvenir items (silk scarves and bags, woodcarvings, etc.) and clothing, Toul Tum Poung is a well-frequented market among tourists. Additionally, a handful of air-conditioned “export” shops have cropped up that offer factory over-run designer clothing at hugely discounted prices.

Afternoon visit Tuol Sleng (including) (S-21) has been turned into the Tuol Sleng Museum, which serves as a testament to the crimes of the Khmer Rouge 1975, Tuol Svay Prey High School was taken over by Pol Pot’s security forces and turned into a prison known as Security Prison 21 (S-21). This soon became the largest center of detention and torture in the country.

Overnight at hotel in Phnom Penh. 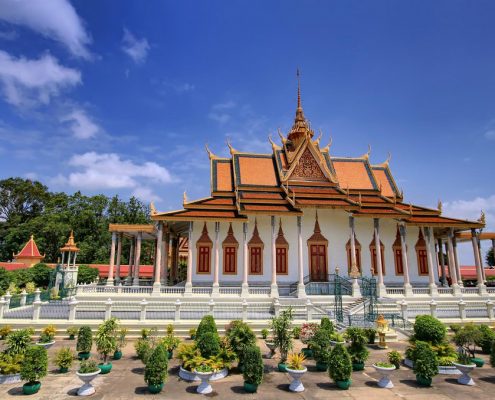 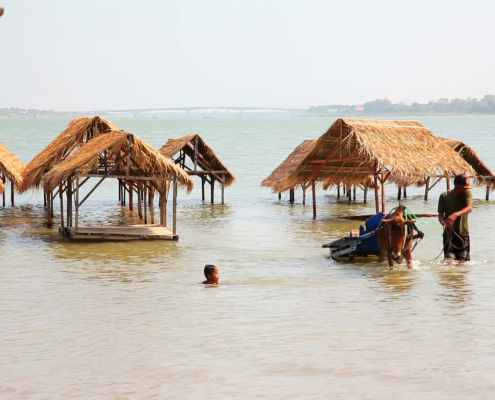 After your breakfast start tour to visit Silk Island/Koh Dach Island by taking the private boat. Upon arrival you will continue by Tuk-tuk to visit this famous island; is located 30 kilometers along the Mekong River and it is roughly about 15 kilometers northeast of Phnom Penh. On Koh Dach you can visit a silk weaving village including visit Community Training Of Khmer Traditional Silk Weaving and watch the woven silk on old looms. The island is also famous for its handicraft production, pottery, osier craftwork, woodcarving, painting and jewelry cutting. This traditional silk weaving village of handicraft production is the best place to buy home some excellent souvenirs then continue to visit Koh Dach Beach. This beach is very interesting beach in Koh Dach commune.

Lunch at local home stay, then in the afternoon back to Phnom Penh for overnight.

Visit Oudong Mountain, about 40 kilometers northwest of Phnom Penh along National Route 5, a mountain topped with the spires of stupa rears from the plain like a fairytale castle. This is Phnom Oudong, at one time an ancient capital. We Stop on the way to visit Kompong Chhnang where you a walk in the traditional villages of potters where the craftsmen make the braziers for cooking and many other useful items to everyday life and the decoration of the Cambodian houses.

Lunch at local restaurant, then continue our journey to Battambang directly. Overnight will be at hotel in Battambang. 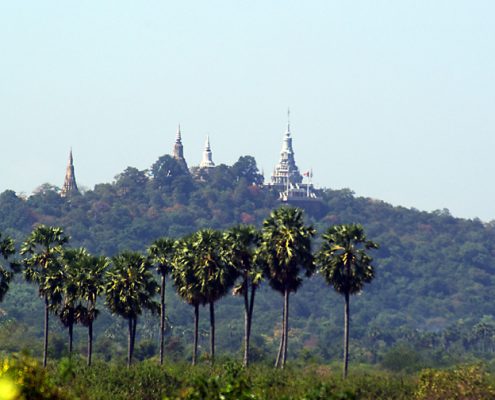 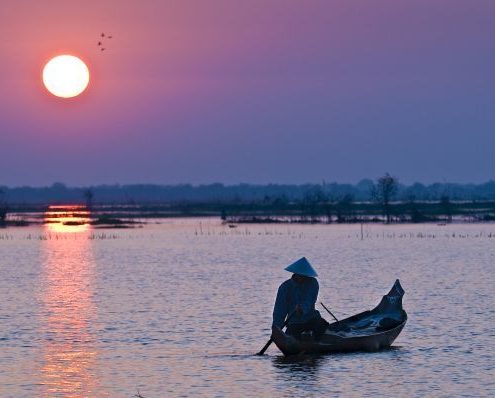 Visit Oudong Mountain, about 40 kilometers northwest of Phnom Penh along National Route 5, a mountain topped with the spires of stupa rears from the plain like a fairytale castle. This is Phnom Oudong, at one time an ancient capital. We Stop on the way to visit Kompong Chhnang where you a walk in the traditional villages of potters where the craftsmen make the braziers for cooking and many other useful items to everyday life and the decoration of the Cambodian houses.

Lunch at local restaurant. Continue our journey to Battambang directly. Overnight at hotel in Battambang

Transfer from Battambang to Siem Reap. Stop over at Puok silk farm for visiting. Rest of the day at leisure

Start to explore by South Gateof Angkor Thom known as Big Angkor, 3km2 walled and moated royal city and was the last capital of the Angkorian Empire, The famous Bayon Temple was an architectural muddle, in part because it was constructed in a somewhat piecemeal fashion for over a century. Terrace of the Elephants is an impressive, two and a half meter tall, 300 meter long terrace wall adorned with carved elephants and gradual that spans the heart of Angkor Thom in front of. Terrace of the Leper King is at the north end of the Terrace of the Elephants, a double terrace wall with deeply carved nag as, demons and other mythological beings and visit Ta Prohm temple which is a wonderful combination of human genius and natural beauty! Giant trees have grown here for centuries

Angkor Wat temple the founder of the temple was Suryavarman II who reined Cambodia from 1113 to 1152 and built the five towers in the 12th century to dedicate to the Hindu God Vishnu. The plan of the pyramidal conception of the temple combined with spaces, alleys, ditches is an ancient masterpiece of architectural design and construction. Overnight at hotel in Siem Reap

Free on your own leisure in Siem Reap.

Free on your own leisure until transfer to Siem Reap International Airport with driver only. 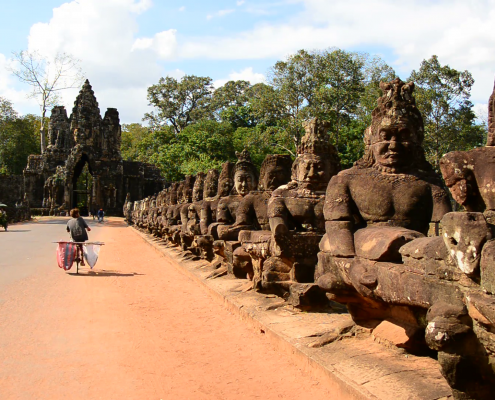